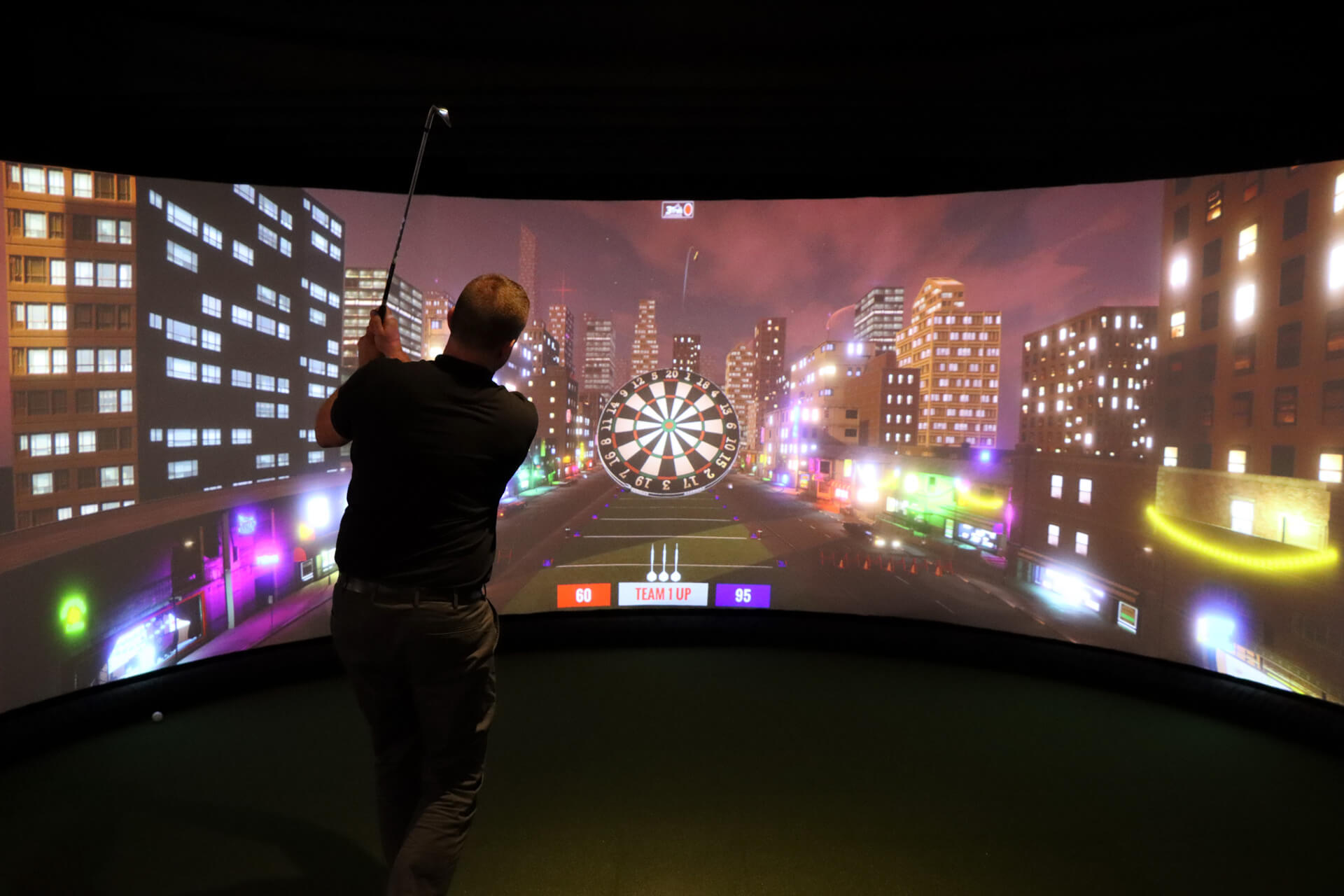 aboutGOLF Simulators Do a Lot More Than Just Golf

Luke Elvy, is a passionate golfer and sports broadcaster with 25-plus years of experience. Elvy has commentated and hosted for an impressive number of sports networks including CBS Sports, ESPN, PGA Tour Entertainment, TEN Sports, Fox Sports Australia and US, and more. Notable tournament coverage includes CBS Commentator at the Masters in Augusta, Georgia since 2010 and is the voice of the PGA Tour’s Esports game.

aboutGOLF is understandably proud of the precision of their golf simulators. In my opinion, they offer the best holistic experience in the business, particularly when it comes to the short game. Not every simulator can truly simulate every aspect of a round of golf, but aG’s is the closest.

But that's not all they can do, which is vital knowledge—especially if you have children.

Obviously, my initial interests were improving my game and engaging friends in a little competition—as evidenced by my latest Twitter challenge. But when Brett Campbell and Randall Henry told me I could watch movies on it or use it as a workout center or live stream sports on it, I thought to myself, “It doubles as an entertainment room!”

Once we installed our aboutGOLF simulator, a family tradition was established. Every Friday night, we’ll put out the beanbags, get comfortable, and stream a movie on the big screen. It's special for us all, but especially the boys who just love it. Right now, they’re into the Avengers & Star Wars movies, but they do choose a nature show now and then. Viewing scenery or the ocean on that screen is incredible.

We take turns on who picks the movie. They play some golf games as well. It's a fun space we enjoy being in, and it has become a family room.

Last year at Thanksgiving, we hosted my 73-year-old mother-in-law, my wife, my brother, and his family. Instead of sitting around passively watching a football game while the turkey cooked, we all played Skee-Ball.

Name one other thing you can do as a family that everyone actually enjoys across ages three to 73. Because we all played a more interactive game, we have fabulous family memories that are so much more valuable than sitting around a television.

Social Gatherings for the Grown-Ups

My wife has had the girls around for a bit of nine, wine and dine. They pick a course and play in between nibbles and a glass of wine.

I also invite friends over (pre-pandemic and hopefully again soon) for some serious matches. I play against three or four of the best players in the Valley. We pick the venue and sometimes make things interesting with a little cash (as friends will do). We have a laugh and a few drinks while watching football using the picture-in-picture feature.

Of course, everyone likes an excuse to play Pebble Beach. Because I'm a golf nerd, my favorite is probably the Old Course at St. Andrews. I love the Old, New & Jubilee courses at St. Andrews.

Clearly, it’s impossible for me to pick one favorite, so we try to rotate courses when there’s a group playing.

I love ball-striking games including Razor's Edge. The fairway sharpens off after each round. It tests how you deliver under pressure and puts a premium on hitting a straight drive. In modern golf, you drive for show & dough!

In Canmore (next door to Banff), we've already had a lot of snow days since the middle of October. Golf season and summer both end abruptly in Alberta. Winter outlasts summer up here in the Great White North so a golf simulator is the only way I’m practicing golf year-round in my hometown.

I usually sneak in at least thirty minutes of practice 3-4 times a week. I can have a range session & play a round of golf in under an hour. That's huge with two young boys who want my attention while they're awake. Time is not something I have an abundance of anymore, but a simulator session takes way less time than a 5 hour round at the course.

With data that is so accurate, I get direct feedback on how to improve my game. This year, my handicap has gone down from a six to a three. Mainly because I’m building my confidence & consistency of my ball-striking. That's a massive drop after playing for 37 years!

Why Simulators Are Worth the Investment

The family entertainment value of a multi-purpose simulator is priceless. But for those of us who love golf and are a bit obsessed with perfecting our game, it’s a fantastic investment.

Using an aboutGOLF simulator doesn’t leave anything to chance. It does two things:

PGA tour players who use accurate simulators say they have less doubt because they know when they pull out a club, they know exactly how far it’s going to fly.

I know each club's maximum distance, but more importantly, it’s average, which is where us recreational golfers so often go wrong. I know the angle of attack, club face path, ball flight plus speed as it comes off the club, carry distance—all the important information about my game. So, when I hit a shot, there's very little left to chance.

As a player, that's the big win for me.